Popeye
Just musings and views. Nothing more, nothing less.

I first heard this beauty in a small basement club in Portsmouth city centre called Martha's. From memory it was really just a downstairs function room in a pub but they used to have a club night there on a Thursday night focused on playing the edgiest and hippest new music, the kind that the normal nightclubs didn't play and the sort of music I was reading about in The Face magazine in 1980. Including imports and pre-releases. They played the full 12" versions rather than fading them out. It felt sort of exclusive which made it even better.

Before they had their chart hits, Was (Not Was) were an extremely hip duo from Detroit and "Wheel Me Out" was their debut single only available on 12" on the equally hip New York avant-garde record label Ze Records (it was actually on their Antilles imprint).

It's a fantastic slab of quirky dance music, with a very funky and sleazy bass, samples of strange vocals, clanging percussion and weird trumpet and guitar lines. Clearly the best thing was (Not Was) ever produced, it was so innovative at the time, and it takes me back to being 18 years old living for the next Thursday and the next brilliant music the fast-changing sub-cultures of the time regularly produced. 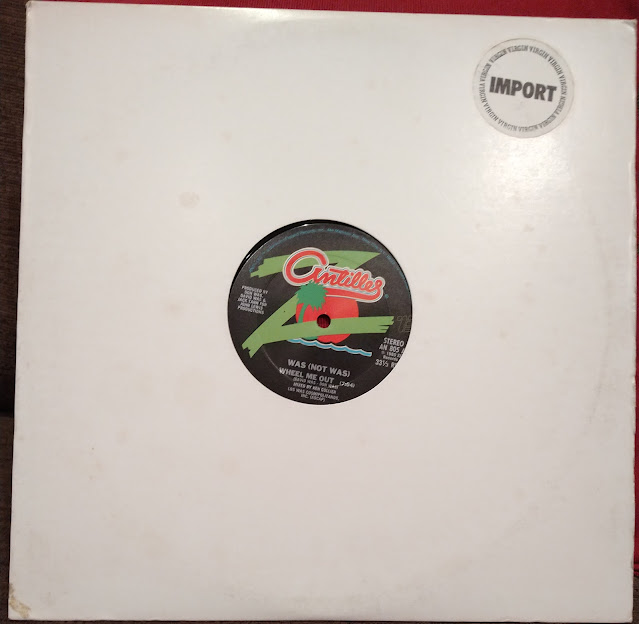 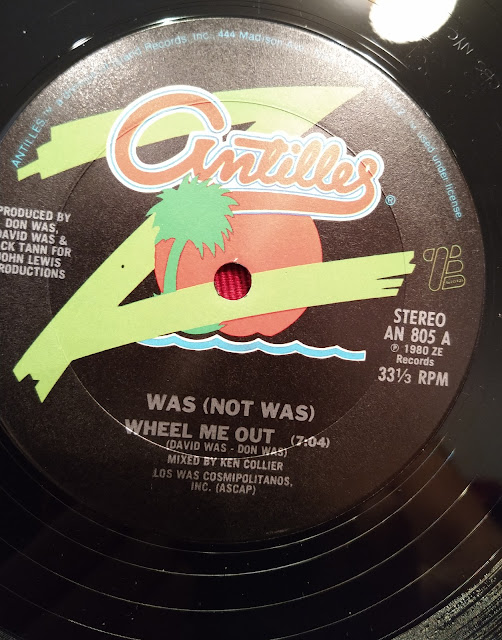 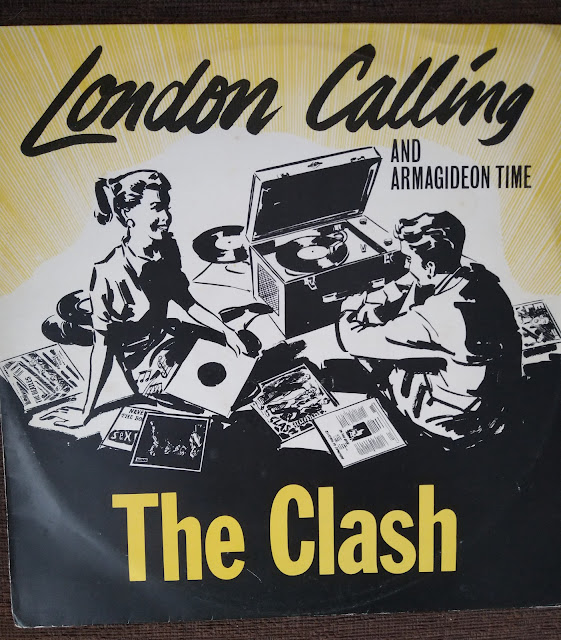 As ever The Clash thought about their fans and provided brilliant value for money. On the face of it this is about "London Calling" which charted, but we all knew the song already and the version on this is the same as the one on the album of the same name.

No, what this 12" is all about and what Clash fans like me bought this for was "Armagideon Time", not on the album and produced by The Clash themselves. On the A-side you get an excellent if straightforward version of this reggae classic; but the real gem is on the the B-side: 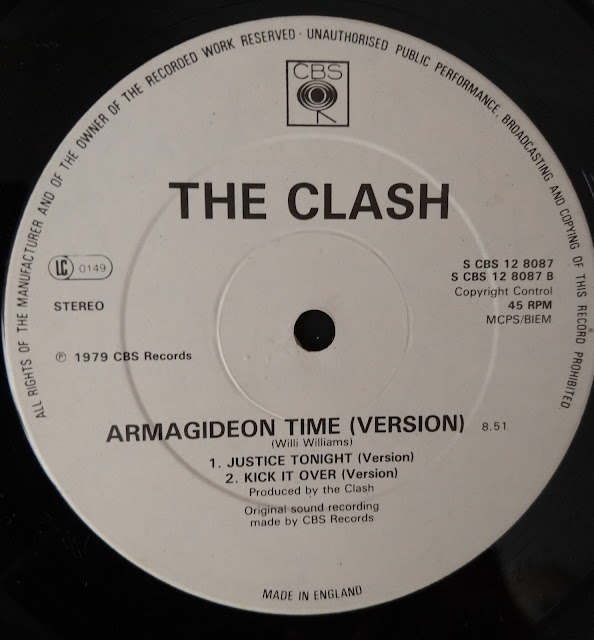 Nearly 9 minutes of a dub version of the song - in two parts. The key thing which stands out is that on both Paul Simonon's bass is cranked right up, to the point where it shudders and reverberates, and Topper Headon's brilliant drumming is brought right up in the mix. Both show what a great rhythm team The Clash had, perhaps underrated and suffering from the focus on Strummer and Jones.

It's just a brilliant performance with equally good production; typical Clash - they always produced excellent B-sides, and this ranks as probably one of the best. 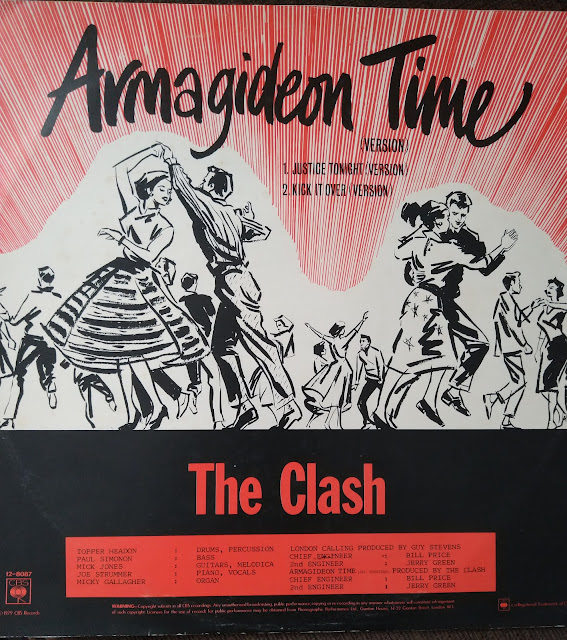 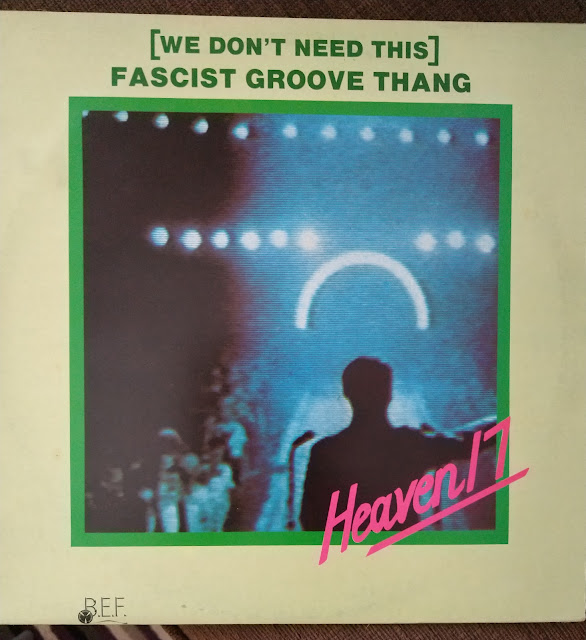 By 1981 things were changing - I was now working in Portsmouth city centre and was able to spend my lunch times perusing the record shops. Music was changing too - punk and new wave had had their day, ska and new romantics had taken over and there was an emerging electronic music scene - with Sheffield bands the Human League and Heaven 17 leading the charge.

March 1981 saw this debut single from Heaven 17, a catchy, danceable slab of electro-funk with heavily political lyrics (which could apply equally today as back then - nothing's really changed). As was my way in 1981 I had to have the 12" version, although interesting to note now the song wasn't a massive hit - not helped by being banned by the BBC as too political (and by possibly libelling Reagan). It came out a good six months before the band really hit the big time with their classic debut album 'Penthouse and Pavement'.

Listening to it again it still holds up and it's been covered several times including by the likes of New York hipsters LCD Soundsystem. 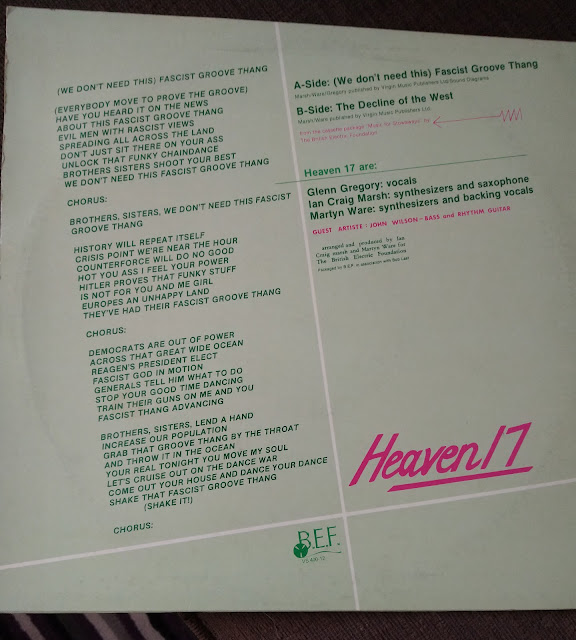 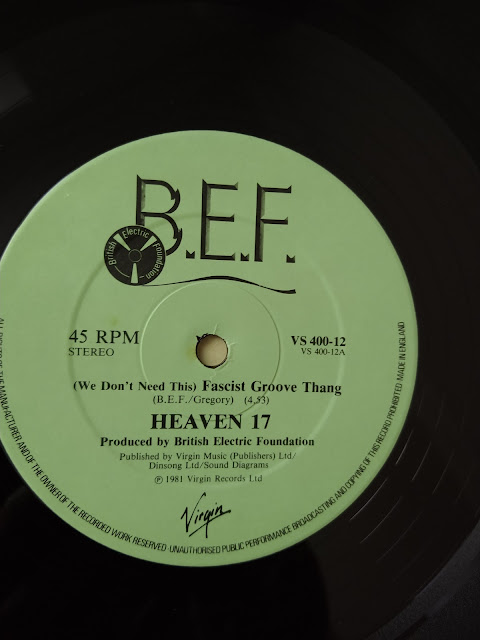 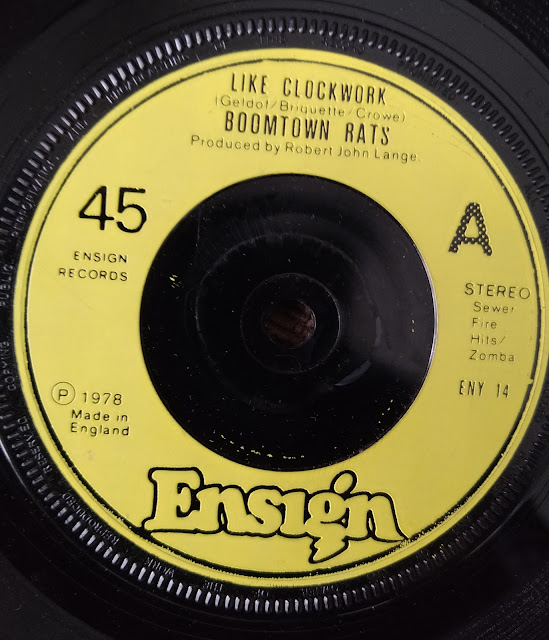 I always think of the Boomtown Rats in two ways - the pre-fame band and the post-fame version.

It's hard to remember them pre-fame but I used to love the Boomtown Rats at that time - when they first came over from Ireland right in the middle of the punk explosion. Geldof was another snotty-nosed lead singer with attitude not the Saint Bob he became.

Their first album was released in 1977 contained the brilliant single 'Lookin' After No.1', and they followed it with a new single 'She's So Modern', released in March 1978 and taken from their next album (bands recorded albums so quickly in those days). I loved this single too so me and Duffer, my mate from school, went to see them play at Portsmouth Locarno on a school night - Tuesday 28th March 1978 (I was 15 years old). I still remember the gig, totally dominated by Geldof's presence, always saying something controversial, particularly about the press/media. They were a great live band, very accomplished musicians whilst also radiating raw energy; they played lots of tracks from the forthcoming album 'A Tonic For The Troops' including 'Like Clockwork' released as a second single from the album in the June.

This single shows the Rats moving on from punk, it's feels a bit Talking Heads-esque and definitely marks the point where they left punk behind. I've listened to the whole album recently and it still holds up with great songs and performances but it definitely ain't punk. The B-side 'How Do You Do?' is a little cracker that shows the old Rats in full glory, it has a wonderful change of gear coda about 45 seconds from the end.

I've subsequently read that Geldof always wanted to be a famous rock star and with the third single from the album 'Rat Trap' released in November 1978 he achieved his aim - it went to number 1, repeat appearances on 'Top of the Pops' and then more success ('I Don't Like Mondays' etc ) including the Cult of Bob...

I lost interest after they became successful and part of the mainstream, purely because the music didn't work for me anymore. But pre-fame I loved them. Here's the music:

No-one can begrudge a band commercial success and popularity, but there was a time when they first released records that Spandau Ballet were incredibly hip and were leading lights in changing the musical landscape in the UK,

The 'New Romantics' were a new movement and Spandau were a key part of it; I didn't follow the fashion but the initial rush of music was great; Gary Kemp has always had a great sense of melody and when coupled with the force of a new youth movement it sounded and felt great - the early Spandau singles were fantastic.

"The Freeze" was their second single and I bought the 12" version, the remix on the B-side is still a terrific dance track; a great slab of electronic dance-funk; it's easy to forget how synth-orientated they were in the early days, the Kraftwerk and Bowie influences clear for all to hear. I remember requesting this song repeatedly at parties and the subterranean club I used to frequent in Portsmouth on Thursday nights in 1981.

I stopped buying Spandau Ballet records after this - they chose the mega-stardom route and by definition the music softened and appealed to me less and less.

But for a few months, Spandau's music hit the spot. Here's the remix in all it's glory: 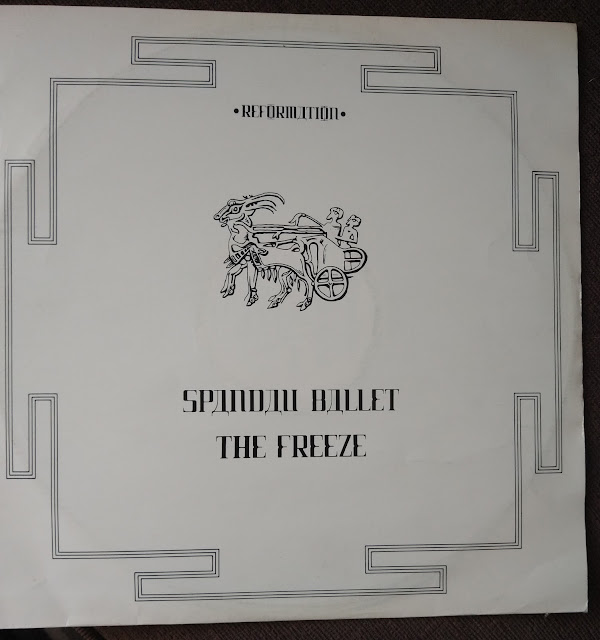 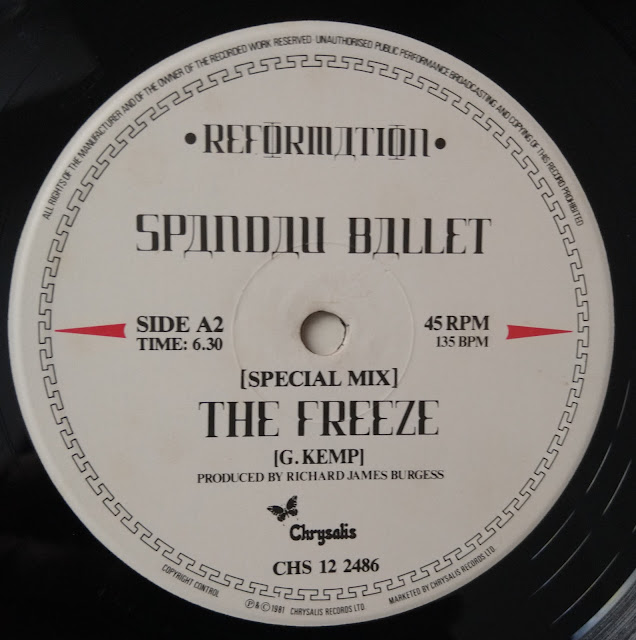 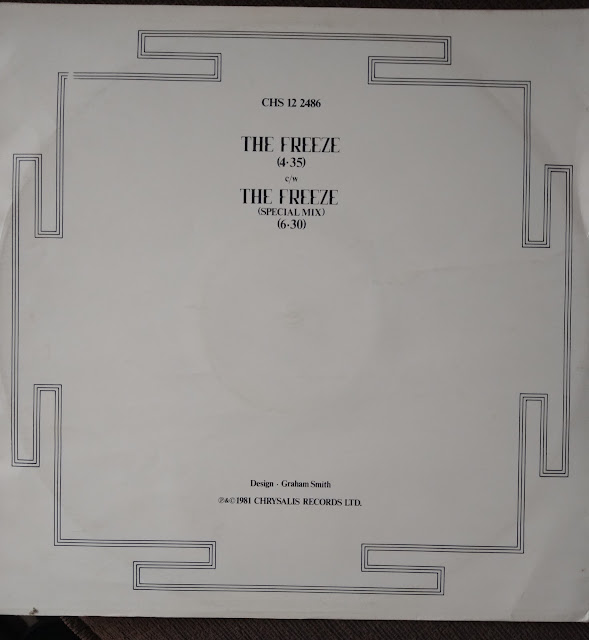 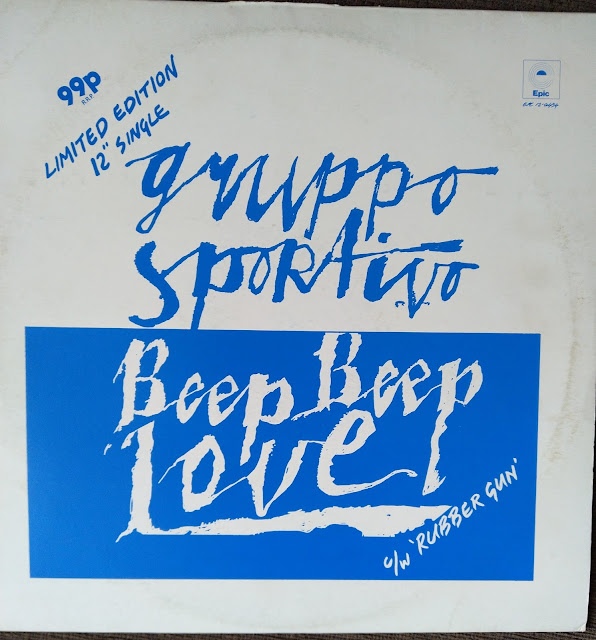 I bought this in Focus Records in Waterlooville in 1977 after hearing it on the John Peel radio show. The promotional price of 99p for a 12" single would have been a big factor in the purchase for this 15 year-old.

Apart from Peel playing them regularly (and I think having them do a session for his programme) I knew nothing about them except that they were a Dutch band, but what I did like was this very catchy, off-kilter pop gem that doesn't take itself too seriously. Playing it again for the first time in years, those endearing traits still shine through and I have to say this 57 year-old is still very fond of it! 99p well spent me-thinks.

Research tells me that the record was produced by some Dutch bloke out of Golden Earring (of 'Radar Love' fame), and that the main bloke behind Gruppo Sportivo (which is a great name for a band) was and still is slightly strange. 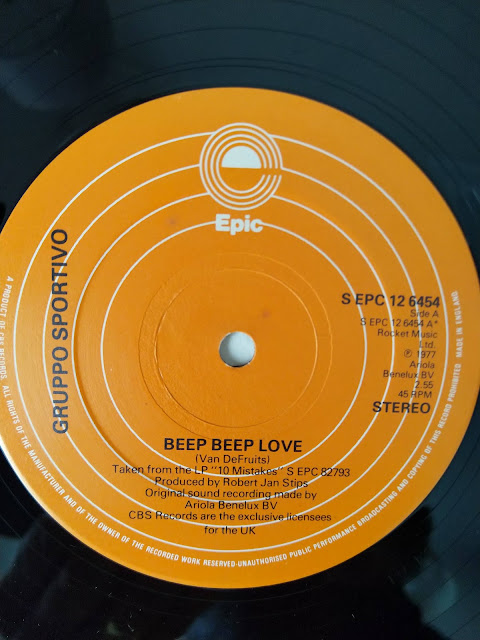 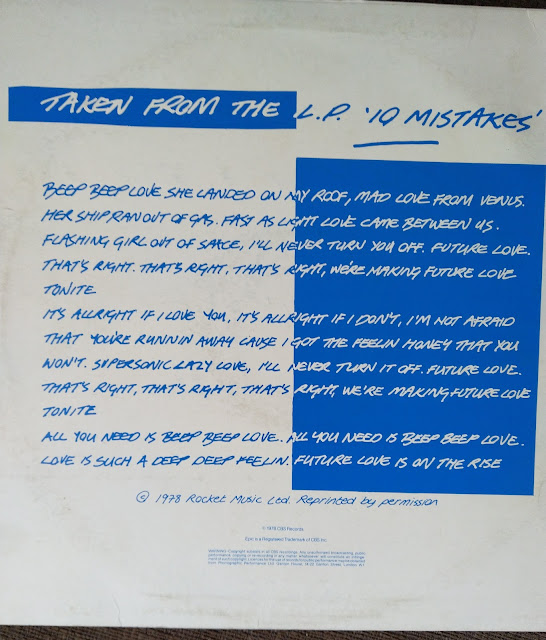 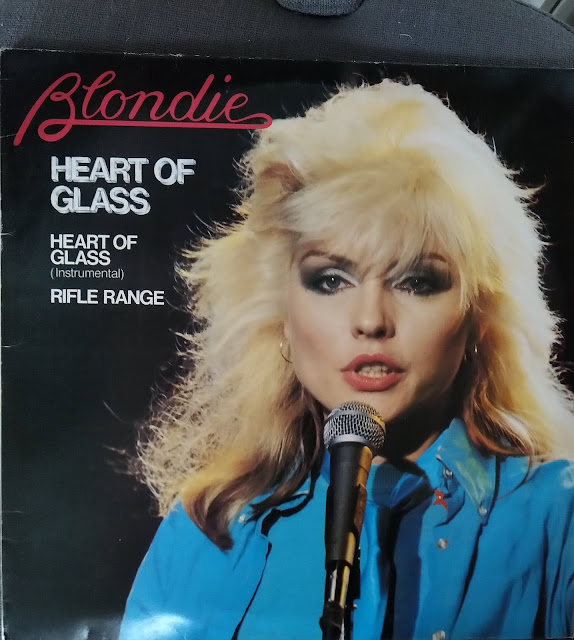 I'd liked Blondie since their first album and their brilliant early singles. But when this came along it was a step up and it gained them (and Debbie Harry especially) superstardom.

It's just a perfect slice of Moroderesque disco, and this is the full near-six minute version. What I've always loved about this record - and still love - is Clem Burke's brilliant drumming - especially on the extended outro. Quite simply superb. 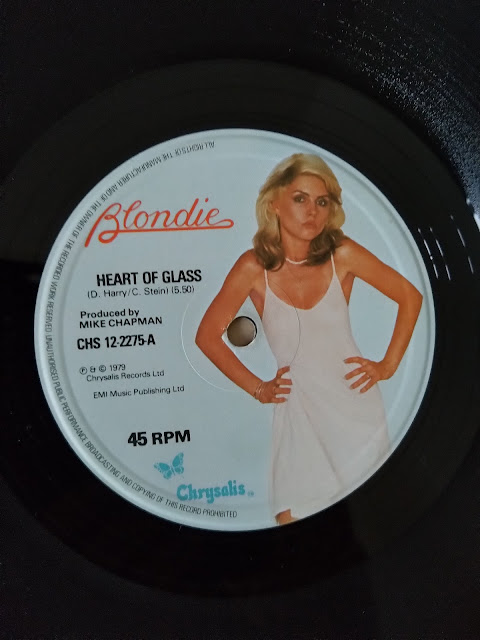